Next up is 27 year old DJ Paola Shea from New York City. Paola says we can call her "Pow Pow", but I'll pass, thanks. I think I'll call her Payolla. She kinda looks like she's always after a check. Payolla says that she was "definitely" a recruit and, rumor has it, she is a friend of that gem GinaMarie.

When asked what she's most looking forward to, Payolla says the Challenges EXCEPT for the memory ones because she says she has a memory like a goldfish. I'm the same way. I'm very much like Drew Barrymore in 50 First Dates. I'm always surprised when people talk to me about an HG or a Survivor I swear I've never heard of, only to discover I've written about them for 3 months straight. 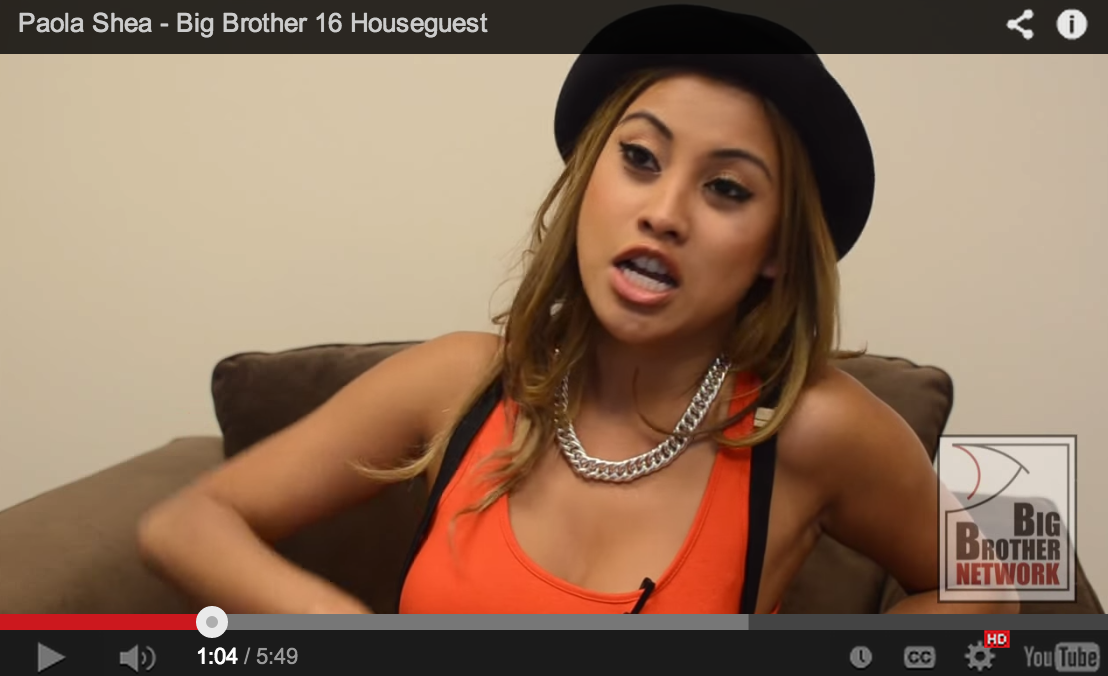 As far as what Payolla will bring to the house that no one else will, she says, "My uniqueness. Who I am as a person. I think this is the first time they've had a female DJ. I'm a unique person. I'm special." Rrrrright. But when Payolla is asked about strategy is when she gets my attention. She says it'll be impossible for her to fly under the radar as her personality is way too big. And when it comes to strategy, she wants to be the manipulator behind the scenes. She absolutely 100% doesn't want to get any blood on her hands and would rather have someone else do that for her. As much as I'd like to hate her simply for the GM attachment, I have to admit that I dig her answer here. I'm always drawn to the sneaky take charge gals who can manipulate others into doing the dirty work for them. Those type of players keep me on my toes wondering what's a scheme and what's coincidence. Amanda, for one, was great at this. You didn't always know what Amanda was up to which was what made her so fascinating and addicting to watch. I wonder if Payolla can step up and impress me.

When asked about who she'll target first, Payolla says she's going after whichever HG is the most annoying. LOL that's pretty funny because I know I would be exactly the same way. Sure, it's not necessarily the smartest way to play, but a girl's gotta be comfortable and if you've got a snorer or a high talker or maybe a smelly person, you've GOT to kick them to the curb. It was always a mystery to me how Frank managed to stay in the house as long as he did considering his B.O. was legendary. If I had to take a guess, I'd say that Payolla is going to despise Nicole. I wouldn't be surprised if the Live Feeds turn on and we find Nicole in a heap of tears and jelly beans in the corner because Payolla has been torturing her all week long. Fingers crossed!

Surprisingly, Payolla is hellbent on creating an all girls alliance. Wow. That's the third person to say they want the girls to rule the house. The odds of it happening are going to depend on how the house is split. Do you think the girls can pull it off? Will the guys get plucked off one by one? What do you think of Payolla and her plans to manipulate the house? Comment it out bitches and have a great day!