Next up is 22 year old Photographer Victoria Rafaeli who lists both Israel and Brooklyn as her hometowns, but currently lives in Florida. Victoria is another one of those naughty Recruits we tend to thumb our noses at. Vicki, here, finds it really funny that she was recruited since she is a huge Big Brother Israel fan every summer when she's in Israel. I don't begrudge her anything for that. In fact, I applaud her. I happen to be a very big Big Brother Australia fan. I also watch Big Brother UK, but it's not as great as it used to be. Australia, however, is GENIUS. If you've never seen it and you've got a lot of time on your hands, go back and watch BBAU 2012.

So let's get back to the States where our Big Brother is different (shittier) and unlike all the Big Brother's around the world. When asked what she'll bring to the house, Victoria purrs, "Victoria. I'm exotic. I don't think they've ever had anyone exotic." While that answer is completely ridiculous, I might be digging Victoria. She says she loves to watch the Competitions , but mostly enjoys the myriad of ways people scheme and backstab each other. That's my favorite part too! 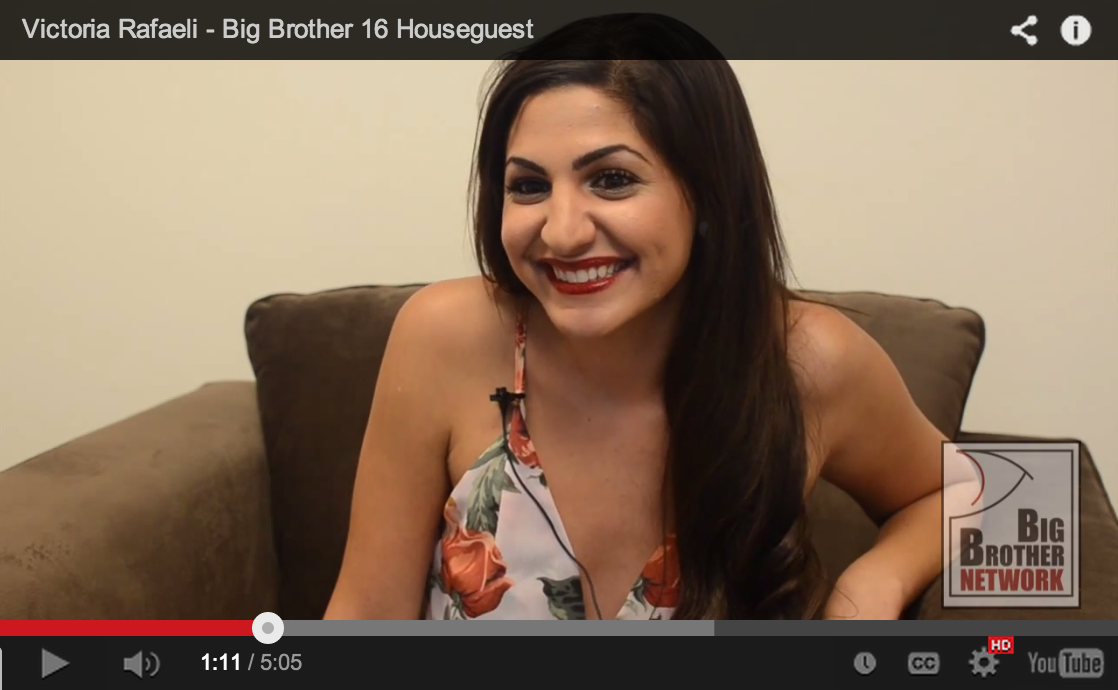 Victoria has a way of talking that is part sexy, part valley girl, part cosmopolitan. She's affected just a tinge, but for some reason it's not bothering me. When it comes to strategy, Victoria's plan isn't all that different from Payolla's. Victoria seeks to manipulate while flying under the radar. She doesn't want to come out like gangbusters early on and get kicked off immediately. And when seeking an alliance partner, Victoria wants to seek out a player that no one would ever suspect she was working with. I've got the perfect one for her. Donny! On the surface, they're like Israel and Palestine, but beneath maybe they could find peace. Aww see what I did there?

However, when it comes to voting people out, Victoria isn't going to be shy about targeting the big threats early on. She'd rather keep the quieter, crappy players in the house so she can beat them easier in the end. Makes sense I guess.

You know what, I kind of like her. She's got a personality, but she's not over the top. You can tell she's bright and her game play might be interesting to watch. She's strong compared to a twit like Nicole, but she's not loud and insane like Jocasta. I'm keeping my fingers crossed she doesn't let me down.

What do you guys think of Victoria? Could she be our strategic mastermind? Comment it out bitches and have a great day!


Special thanks to Matt at the Big Brother Network for supplying the cast interviews from whence I steal my screencaps. Thanks Matt!
Posted by Colette Lala at 2:07 PM