Zach: Eye On The Prize

Last one! This here is 23 year old Zach Rance and he is a recent graduate of the University of Florida. Right off the bat, his hair is stupid. Oh come on! You were totally thinking it too. Zach talks just likes his picture looks if that makes sense. He's loud, he's forthright, and he's going to be big drama, I just know it. I also have a sneaking suspicion he's taken Ritalin everyday for the past 17 or so years. But you know what? He's cute! He's not dangerous hot - which is totally my type - long hair, leather pants, maybe a snarl - but Zach's a cutie patootie. The girlies are going to love him and I'm sure he'll look dreamy with his shirt off. I suspect, he'll be the eye candy of the bunch. 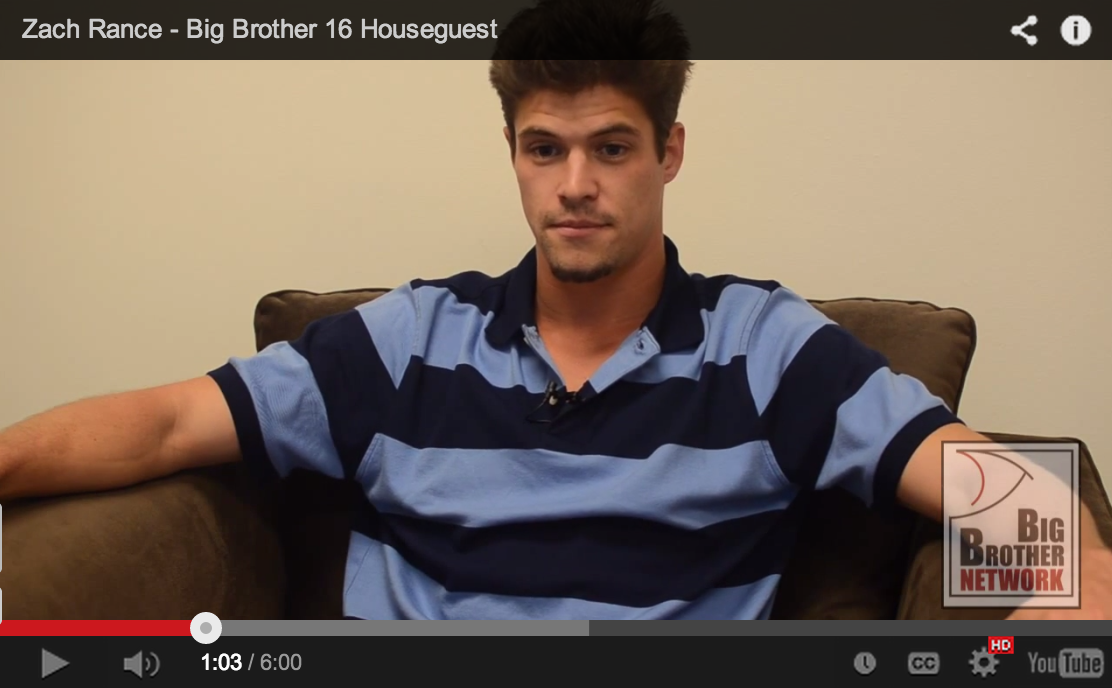 When asked how big of a fan he is, Zach replies, "On a scale of 1-10, 10 being Ian Terry, I'd say I'm a strong 4 1/2." *laughs* Good! He's funny. Finally! I'm desperate for someone to make me chuckle. So far we've had some of the dullest people to walk the earth, but now we have this crazy cat to lighten the mood. And when he talks about why he's on the show, Zach says, without blinking, he's not here for any type of "experience". He's here for 500,000 reasons and he's not leaving without the grand prize. I like that confidence! You've got to envision what you want. My girl Shakti Gawain taught me that years ago and here I sit running a moderately successful blogging empire that makes me close to THREE FIGURES a season. Wait, what?

As far as what Zach brings to the table, he says he wants to make everyone like him. He's a fun, sociable, personable guy who is skilled at making people feel good about themselves. His goal is to make it difficult for people to want to vote him off. Interesting. He's savvier than his hairdo. That's good news. However, when it comes to competitions, Zach plans to throw about 99% of them unless his back is up against the wall and he has to win. Being a young fit guy, he doesn't want to come across as a big threat or too intimidating.

When it comes to alliances, having a secret ally is definitely in his playbook, but for the most part he wants people to come to him rather than the other way around. I can't believe I'm saying this, but Zach might be my early favorite. Rarely, do I pick a male to root for - girl power! - but I think Zach is going to be not only entertaining, but interesting strategy-wise. I suspect he could throw a monkey wrench into the All Girls Alliance if someone like Nicole is charmed by Zach's boyish good looks and pecs. Most importantly, he's not douchey. He says what he means and means what he says. He has a goal in sight and he'll do whatever he has to to achieve it. You can't hate on that.

So what do you think of Zach? Will he be the life of the party? Or will he be the girls' number one target? Comment it out bitches and have a great day!

And that's it for me until later next week when I recap the first night in the house! Until then, you can catch me tonight on the premiere of the Big Brother Gossip Show at 10 pm. Scott, Mike and I will be running down the entire cast and discussing all the new twists and changes. Be sure to follow me on Twitter and friend me on Facebook for show links. If you can't catch the show live, it will be available for free download on iTunes.