Next up is 26 yr old former pro baseball player Devin Shepherd. Right off the bat - Get it? Bat. I'm here all week, people - I am charmed by Devin's enormous mouth and I don't think I'm being inappropriate in suggesting that Christine and Devin hold a contest to see how many fists they can both fit inside of their giant gobs. I mean, come on! I'm only saying what everyone else is thinking. But let's get down to serious business... 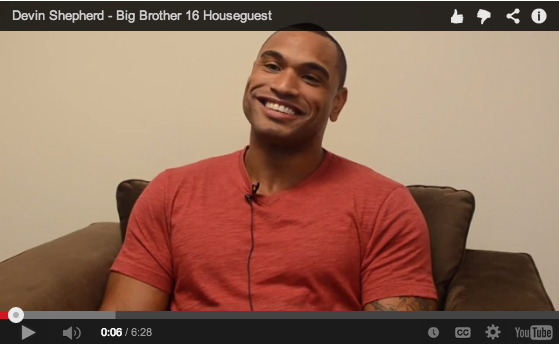 Just look at those cheeks! Alright, I'm buckling down and I'm going to strap on my serious writer chapeau - a beanie with a propeller. The first thing I notice about Devin is just how bloody happy he is about everything. And I'm talking EVERYTHING. While talking about how he missed Father's Day with his 2 yr old little girl, he positively beams. Ask him about the crisis in Iraq and I'm sure he'll chortle and giggle. It's very entertainment news caster-y. And when he lifts one eyebrow and tilts his head back for every other word, I kind of want to smack him with a frying pan just to see if he'll cut it out. 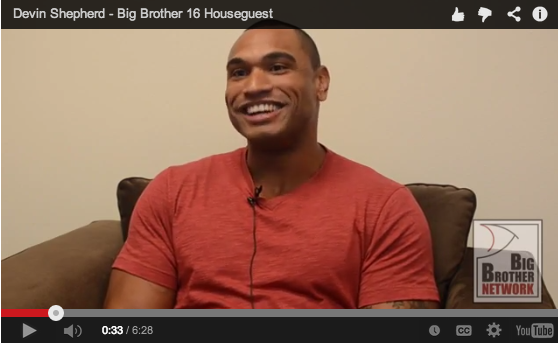 This is the face he made when he said, "Father's Day was tough. You know, missing that..." 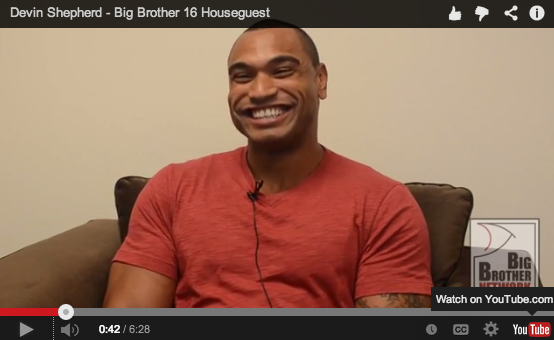 Dude, you're freaking me out! 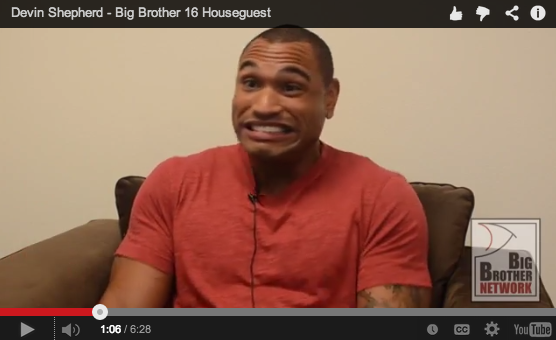 Alright, so it turns out that Devin is another cast member who applied for The Amazing Race with a former girlfriend, but was nabbed - sans girlfriend - for Big Brother instead. When asked what he's most excited about this season, Devin replies, "I'm just so happy to participate in Big Brother because it's America's game. It's a game that America has adopted as their own." *looks around the room* Huh? Come again? What the hell is he talking about? Does anyone have a clue because I sure as hell don't? Oh Christ, this guy is going to annoy the crap out of me.

As far as strategy goes, Chuckles plans on playing the most honest and morally sound game he can. Gank! Bzz! Zrrp! You're out! Oscar Wilde had no patience for morality and neither do I - especially when it comes to Big Brother. I want lying, backstabbing, elaborate ruses, fake outs and all sorts of diabolical scheming. Sitting at home sacrificing my summer watching someone being kind and good is my version of the ninth ring of hell. No thank you!

So, what do you guys think of Chuckles? Can you stomach an entire summer of this guy? Comment it out bitches and have a great day!