Next up is Phil Robertson from Duck Dynasty otherwise known as Donny Thompson. Donny is a 42 year old unmarried school groundskeeper from North Carolina which makes him incredibly creepy. Hey, I've seen True Detective. I know about the seedy underbelly of the South and the Satanic rituals taking place right under our noses. But then I hit play and Donny isn't so scary after all! He sounds like Marty Huggins from The Campaign...

Donny, as I'm sure comes as no surprise, was not a recruit. He was sittin' at home with his girlfriend watchin' an episode of the Big Brother on the TV when the promo asking for future contestants came on. His girlfriend turned to him and said, "We oughta git you awn that show!" And git him on they did. I've gotta admit, he's sort of charming in a weird backwoods uneducated way. You know how I love myself a contestant who lives in a rickety old cabin on the side of a hill like Coal Miner's Daughter. Donny just might be my Loretta. 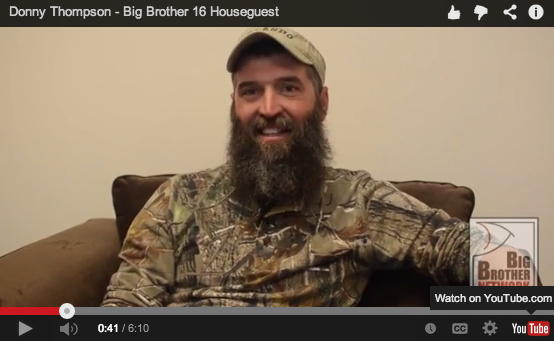 Don't you dare tell Donny that he's only watched a couple of seasons because he's watched EVERY season there is. He's hopin' them comp-titions ain't too hard and he's 'specially lookin' forward interactin' with diff-rent types of cultures and diff-rent types of people. *whispers "blacks"* When asked what he'll bring to the house, Donny says that he's happy-go-lucky and funny. When people first meet him they 'spect a roughneck hunter type when, in actuality, he doesn't go huntin' at all. He couldn't harm a fly, he says.

As far as strategy goes, Donny wants to fly under the radar somewhat, but he knows that that comes with a bad connotation so he'll go ahead and try to win as many competitions as he can. However, he knows he's 42 years old and not as physically fit as the young'uns so he'll try to fit in with everyone by making them laugh, being goofy, and telling funny stories. Donny's motto is, "You can't trust anyone, but if someone can make you laugh or smile you seem to trust them a little more." Awww precious.

Donny is incredibly likable and he's a delightful mish mash of cultural extremes, but he's no game player. He might last a long time simply because he won't be a threat to the other strategic players. It'll definitely be fascinating to see him interact with all the young twenty somethings. I've seen some people comparing him to Spencer, but I don't think the two could be anymore different. But who knows! Maybe there's a perv lurking under all that camo. Butterscotch!

So, what do we think of Donny? Will he capture the players hearts like he will America's? Comment it out bitches and have a great day!