First up today is 30 yr old married police officer Derrick Levasseur from Providence, Rhode Island. As it turns out, Derrick is a long time fan of Big Brother and is familiar with some of the online BB blogs. He made it onto the show the old-fashioned way by submitting a tape, telling Robyn Kass he's an MMA fan and actually applying. Derrick cites being on Big Brother as crossing off another bucket list item. Making a bucket list is something I've never done or ever considered doing. Do people really sit down, take pen to paper and write out a list? Or is it just something you say in a conversation...

"I was thinking of climbing Mt. Everest next year."
"Yeah, that's on my bucket list."
"Can I see your list?"
"Oh, it's not actually a physical list."
"But you just said it was on your bucket LIST."
"Yeah, but, you know, that's just something people say."

As someone who makes lists of EVERYTHING - books to read, make-up to buy, when my Neiman Marcus coupons expire, what I eat everyday - I'm making it a global rule that your bucket list must be a physical list that you can hold in your hand. Otherwise, it doesn't count and you're a liar liar pants on fire. 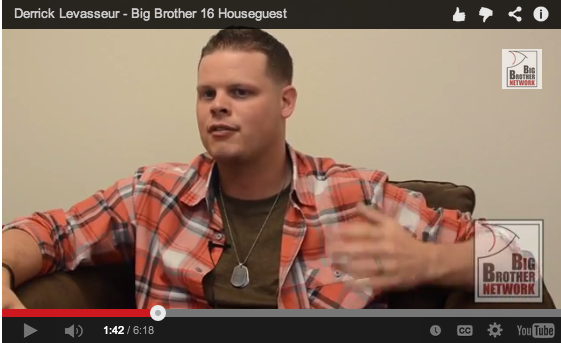 Getting back to Derrick... being a police officer gives him the distinct advantage of being able to read people, but if you'll remember, reality fans, that creature Sarah from Survivor Contagion was also a cop and her "reading people" skills ended at identifying other cops. It'll be interesting to see if Derrick, with a "ck," is able to suss out the liars from the truth tellers. You know what I'd like to see in the house one year? A psychic! Or a soothsayer. Maybe a necromancer. Would a psychic have an unfair advantage like, let's say, Elvira Reilly going into the pre-premiere vote with a built-in fan base? I'm not sure.

As Derrick continues to talk about his strategy of going with the house consensus and building an alliance, I noticed that I chipped one of my nails and nothing drives me more crazy than one icky nail among nine other perfect ones. Look, Derrick is perfectly nice and nothing stands out as really annoying, save that accent, but he's just so bland. He doesn't excite me or make me laugh. He doesn't inspire that competitive fire in my loins. He's a carpet fiber amongst millions of other carpet fibers. He's a doorknob. A welcome mat. There's nothing special here which means he'll probably last forever and bore me to tears. Fingers crossed for some late night frisking and cavity searches.

So what do you think of Derrick? Will being a cop work against him or give him an upper hand in the game. Comment it out bitches and have a great day!