Next up is married 23 yr old Christine Brecht from Tucson, Arizona and she's a barista! With an exclamation point. She turned in a video! Then she went to an open casting call! Christine lives in a world where everything is new and exciting. Her eyes get wide when she says things like "the" and the corners of her mouth reach back to her ears when she speaks about anything Big Brother related. She is one goofy chick. She's that friend you have who is always saying completely inappropriate stuff just a little too loud when you're at a restaurant. She's the stranger who stops to chat about how her second cousin once bought a head of lettuce almost exactly like the one you're about to buy. But with the geek chic glasses and the sleeve of tats, you wonder if maybe you two could get along. Maybe? But then one day she says, "Check out this rad move I can do on my skateboard." And that'll be the end of it. You'll never hang out with her again because it's just too much work pretending to be excited all the time. 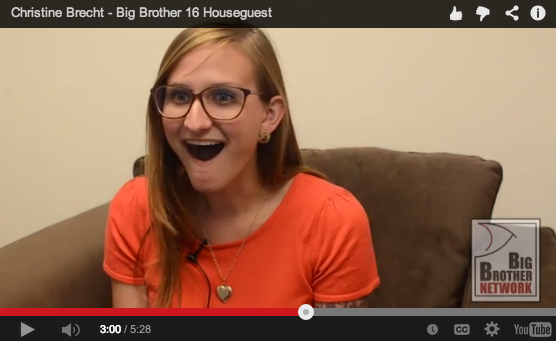 Strategically, Christine wants to have a secret two person alliance that lasts all the way until the final and a second bigger alliance where she can just "destroy" everyone one by one. I'm going to go out on a limb and say that Christine has not only been to a Comic Con at some point in her life, but has dressed up while at said Comic Con.

On the plus side, Christine worst nightmare is being considered a floater. She fancies herself as a behind the scene manipulator. In addition, she wants to win the first HOH competition so that the HG's come to her wanting to form alliances. I have to say, that's probably the best reason I've heard for winning the first HOH.

And then Matt asked her a question that made my heart leap into my throat. He asked Christine what past player she'd like to play with. Was it a hint? Was it an innocent inquiry? I don't know, but I don't like it one bit! Just the mention of past players makes my nipples turn inward and hide. Worse still, she answered Dan. Gross.

All in all, Christine is a weird one. She's loud and she says whatever is on her mind without worrying about what anyone thinks. On the one hand, I admire that sort of carefree zest for life. On the other hand, it's all a little bit too embarrassing to be seen in public with. How she'll fare in the game is a complete mystery to me. She might be a decent player strategically, but if she can't manage to get an alliance behind her, I could see her being cut loose for interrupting every conversation talking about her comic book collection.

So, what do you guys think of Christine? Does she have a shot in hell to win this season? Comment it out bitches and have a great day!

Special thanks to Matt at the Big Brother Network for supplying the cast interviews from whence I steal my screencaps. Thanks Matt!
Posted by Colette Lala at 4:32 PM