As the great Angelina Jolie once said in her landmark role as Maleficent, "Well, well..." Here we are again meeting 16 shiny new faces. I repeat, 16 NEW FACES. You are ordered to dunk your tits in glitter repeatedly for that one, bitches. Thankfully, the rumor of an opposing team of craggly old weather-beaten veterans in bifocals returning to the house appears to be a ruse and aren't we all just a little bit happy about that? I don't know about you, but I'm resplendent. Alright kiddies, enough chitchat. Let's get this show on the road!

The first victim up is 26 yr. old Esthetician/Model Amber Borzotra from Knoxsville, TN. However, she lives in North Hollywood which tells us that she is a recruit. What also tells us that she is a recruit is the fact that she is not all that familiar with Big Brother, but she's just dying to get her hands on those competitions! When asked what quality she'll bring to the house that separates her from others, Amber replies, "Just a positive, you know, bubbly..." and then I nodded off and hit my head on the glass table. Ouch Amber, ouch! Not nice. 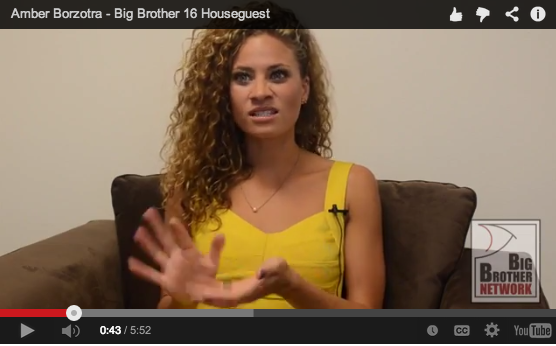 In addition to being bubbly and effervescent, Amber intends to steer clear of the cattiness that sometimes runs amok in the Big Brother house because she doesn't like confrontation. She'd rather sit and talk it out. Oh Amber. Oh silly pretty Amber. *sharpens blade* In addition to holding Feeling Circles and crafting a Talking Stick out of some of that charred wood in the Fire Bedroom, Amber also plans on throwing competitions so the rest of the house doesn't see her as threat. *stabs self in the temple... twice* No, no, no. Bzzz! Gank! Zrrrp! Throwing competitions is a sin around these parts, Amber, and for that (and the fact that you're a thumping bore), I don't think I care for you at all.

Amber has some more cockamamie ideas about teaming up with women and having a small alliance, but, quite frankly, this girl has no idea what she's getting herself into. I don't expect much of anything from Amber in the way of drama and/or strategy. I'm sure she's a very lovely girl in the real world, but in the world of Big Brother, she's one of those Houseguest's you forget the second they're evicted.

So, what do we think of Amber? Are those fake contacts she's wearing? Comment it out bitches and have a great day!

Special thanks to Matt at the Big Brother Network for supplying the cast interviews from whence I steal my screencaps. Thanks Matt!
Posted by Colette Lala at 1:26 PM