Hayden: That Makes 2 Hayden's Too Many

Believe it or not, this little morsel is called Hayden Voss. I know, what are the odds? From his picture alone, I can only assume that Hayden's mother drank heavily while young barely-formed Hayden was in utero. Fetal Alcohol Syndrome exists and it is unfortunate. Anyhow, Hayden is a 21 year old Pedicab Driver living in Long Beach, CA. Pedicab? I think that's Californian for rickshaw. Whatever the hell it is, it facilitated Hayden's lucky break because one day a hungover Robyn Kass, smelling of stale beer, stuffing her nylons into her clutch and dangling her heels by her pinky finger, hailed down Hayden's rickshaw and found herself a Big Brother contestant.

Hayden wouldn't call himself an avid watcher of Big Brother, but he has definitely heard of the show over the years. As soon as he was cast, he committed himself to studying and devoured hours and hours of past Big Brother seasons including After Dark and whatever Live Feeds he could find. When asked what he's most looking forward to, Hayden says the competitions and fancies himself to be somewhat of an underdog who will sneak up on everyone and take first place. I'm not sure in what universe a young fit guy is an underdog in Big Brother, but there you have it. 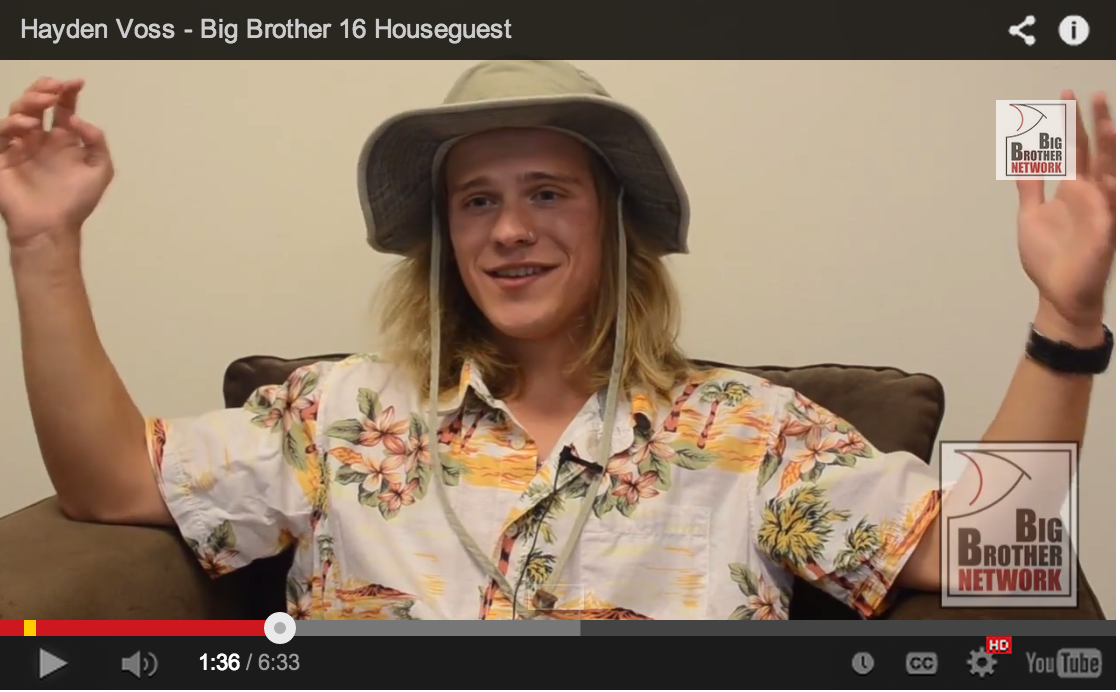 When asked what sets him apart from the other players and makes him unique, Hayden says, "I'll be hilarious!" That remains to be seen, young man. The problem I have with Hayden and the reason I'm not warming up to him AT ALL is because of that unfortunate name of his. I've already experienced one Hayden in Big Brother and that was enough to last me 18 lifetimes. So when another one comes pedaling into my life wearing a stupid hat, you can understand my standoffishness.

Strategy-wise, Hayden plans on being honest for as long as he can, but if he has to backstab to win the money, then so be it. You know what, Hayden? I'll be honest too. You are so freaking BORING! Now pedal away and kindly get evicted as soon as possible.

So, what do we think of Hayden? Is he all talk or is there a genuine comedian underneath that ridiculous hat? Comment it out bitches and have a great day!

Special thanks to Matt at the Big Brother Network for supplying the cast interviews from whence I steal my screencaps. Thanks Matt!
Posted by Colette Lala at 9:00 PM