Next up is 23 yr old Cody Calafiore from Howell, New Jersey and he has cleft chin. If you know anything about me - and you totally should! - then you know that my favorite movie of all time is Staying Alive. It's the story of a lad trying to make it as a star in the mean streets of New York City. He falls in and out of love easily and he knows, just knows, that he deserves much more out of life than he has been given so far. What, you may ask, does this have to do with Cody? *shrugs shoulders* Nothing really. His cleft chin just reminded of John Travolta in Staying Alive. What's it to you?!

So back to Cody... It turns out that he works for an "entertainment company" (sells pirate DVD's on the street corner) on the weekends and one day he bumped into a "casting guy" (Robyn Kass wearing a baseball cap). Bing, bang, boom, here he is as a BB16 cast member. 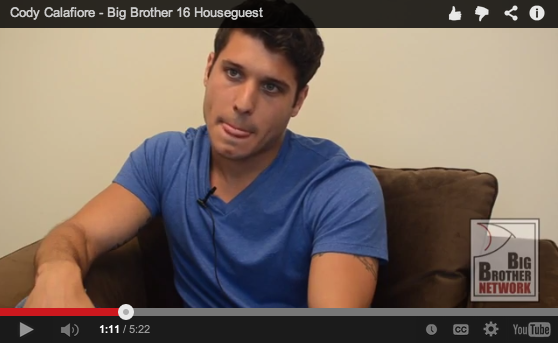 Cody started watching Big Brother during season 11 (the greatest season of all time) and is pretty familiar with the show. When asked what his favorite part of the game is, Cody replies, "The competitions. Yeah. Those are cool." When asked what he'll bring to the game that others won't, he replies, "Fun outgoing personality." And then he just sits there. A wordsmith he is not. He is also not a storyteller, not interesting, not funny and not charismatic. Hmm, I wonder if he IS anything. Let's press play again and see.

Cody IS boring and cookie cutter. He is also predictable, unoriginal, stale, mundane, tame and humdrum. Whew! Good! I was worried I was being too mean focusing on everything Cody isn't, but lookie there. I came up with a whole list of things he is. Yay me! See? I can totally be nice when I put my mind to it.

Strategy-wise, Cody is an all around wizard, "I know that being in a group can be, like, good." Tell us more, genius! "If you're like in a group of like four and you're the fourth one, that's like not beneficial." I don't know about you guys, but I'm like totally learning some fascinating things about the game here.

Let's be honest, this guy is a dud who was cast because someone somewhere thought he was cute. Maybe he'll surprise us all and turn into a strategic mastermind by the end of the summer. You never know. But one thing I do know is that this is the best ending to a movie ever. Please to enjoy:

Special thanks to Matt at the Big Brother Network for supplying the cast interviews from whence I steal my screencaps. Thanks Matt!
Posted by Colette Lala at 5:57 PM