Next up is 26 yr old Caleb Reynolds from Hopkinsville, Kentucky. Caleb is an Adventure Hunting Guide which probably means he shoots squirrels with a BB gun with a bunch of his gun-toting buddies. Or maybe not... 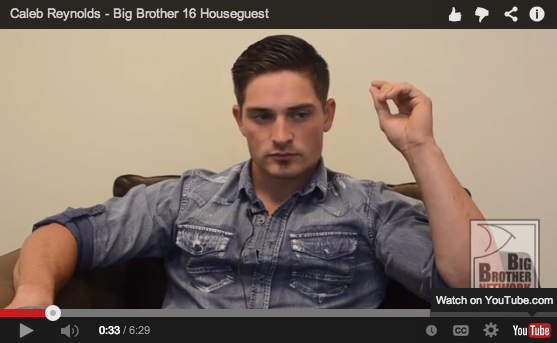 It turns out that Caleb has been "all over the world." For one, he's been to the Eye-Rack and was deployed for 14 months. He has also traveled back and forth between Texas and Kentucky because his parents are divorced. Now, if I pull out my trusty map of the world, Eye-Rack, Texas and Kentucky are 3 places out of like a million and isn't technically "all over the world." However, I'll let that slide because Caleb is freaking me the fuck out. His eyes turned black and he stared at the ground when he mentioned his time in the Eye-Rack. And when he spoke of his parents divorce it was as if he was challenging Matt to doubt him. He likes to bite his lower lip and hold his hand to the left side of his face just so. If I didn't know any better I'd say, HE'S TOTALLY SENDING A MESSAGE TO ABU NAZIR!

The PTSD wanes a bit when Caleb is asked about how he ended up on the show. He becomes charming and chatty as he tells the story of how he and a female friend were trying to get on The Amazing Race. It turns out that someone from Big Brother contacted him and said, "We like you, but we don't like your friend." Interesting. I like that forthrightness and honesty of his answer. Nothing drives me more nuts than when someone sugarcoats an answer in order to be polite. Long story short, I'm not the person to ask if you look fat in your outfit or if your dress is hideous. I will be brutally honest with you because A) I'm a horrible liar and B) You're better off having me save you from going out in public with back fat hanging out of your dowdy cocktail dress. I am simply doing the Lord's work and, apparently, so is Caleb.

When asked if he was a fan of Big Brother, Caleb admits to seeing it time and again, but it wasn't on his must-see list like Duck Dynasty or other "huntin'" shows are. You see, huntin' is Caleb's life. The lad likes to kill things. Pair that with his raging case of PTSD and you've got a recipe for danger. I'm telling you, he's got a dark side and we will see it at some point. I'm half excited and half worried for the other HG's safety. Alright, maybe 95% excited and 5% worried.

As far as strategy goes, Caleb has a bob, hook and sinker plan. It's some sort of fishin' metaphor that I can't quite grasp, but basically he'll be the bobber for a while and then the hooks, or maybe the sinkers, will do something and he'll come at them guns blazing (GUNS!) because they'll have targets (TARGETS!) on their backs. I have no idea what the hell he was talking about, but it all has to do with death and murder and I'm starting to get scared... and a little bit excited. Ok 2% scared and 98% excited.

I know you're all going to think I'm nuts, but I kind of like Caleb. He is going to be the one to watch for me only because I can see him going all Columbine on the house and smearing the other HG's blood on his face. Or maybe not. Maybe he'll just bash some guy's head against the wall a few times. Either or.

So what do you think of Caleb? What are the chances of him being removed from the house for putting someone's fingers down the garbage disposal? Comment it out bitches and have a great day!