Frankie: I Don't Care Who His Sister Is

Next up is 31 year old "YouTube Personality" Frankie Grande and apparently he has a famous sister, Ariana Grande. I'll be honest, I've heard her name mentioned on EW Radio once or twice, but I have no idea who the hell she is therefore she's not all that important which makes Frankie even less important. 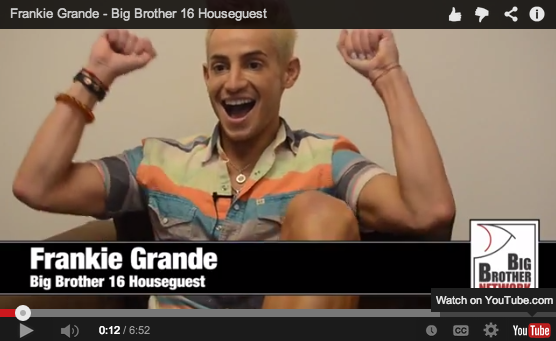 Immediately, I hate this guy and I'll tell you why. I don't appreciate stunt casting. I'm not an idiot who falls for it. Secondly, Frankie starts hamming it up for the camera before he's even asked a question. And C) His bio says he's 31, but Frankie says he's 28. Does he not know that CBS posts the contestants ages? He also says he's an actor, a "social media influencer" (como what?) and a YouTube Personality. Whatever, dude. 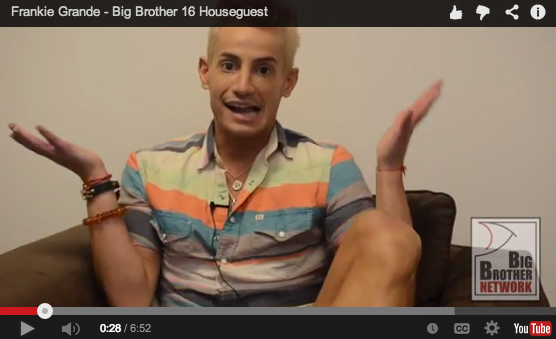 I think he's kind of ridiculous.

ANYHOW, Douchey McGee here says he tried out for Survivor 3 years ago and made the best application video ever. And then one day while stumbling around a Survivor Finale party in ripped fishnets, tattered pumps and a flask peeking out of his bustier, random people from hither thither said, "Douchey, why don't you try out for Big Brother?" So then he made another great application video and here he is annoying all of us.

I don't know if I've matured or my b.s. meter is more refined, but I'm not the least bit entertained by this guy. Maybe Wil Heuser ruined my opinion of the minor celebrity flamboyant gay forever. I remember loving him and expecting him to rock my Big Brother world only to have him turn into a thumping bore and a major yawn fest. His BB YouTube recaps are fantastic and I find them incredibly entertaining, but as an HG he was pretty awful.

So when I hear Douchey say, "I'm a little child. I'm a little boy. And I'm just so excited to go play in Fun Land!" I just kind of roll my eyes and pray for an early eviction. Frankie can promise amazing Diary Room sessions til the cows come home, but deep down I know he's going to be awful. I can feel it in my loins.

So, what do we think of Frankie? Will he bug or delight you? Comment it out bitches and have a great day!


Special thanks to Matt at the Big Brother Network for supplying the cast interviews from whence I steal my screencaps. Thanks Matt!
Posted by Colette Lala at 2:56 PM