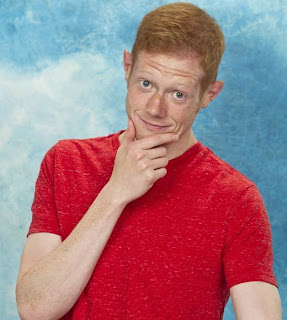 And this brings us to our first man of the house, Andy Herren. Andy is a 26 year old Professor from Illinois which means it shouldn't surprise you that is favorite Houseguest is Ragan. It also may or may not surprise you that Andy is gay. He hasn't told me that, but I turned on the video and jumped to that conclusion myself in about 0.6 seconds. Usually, I love every gay Houseguest right out of the gate. And then I saw a handful of Big Brother Canada episodes and was exposed to a nightmare called Gary. So let's get to know Andy for himself, shall we?

During the day, Andy is a Professor, but at night, when the city comes alive, he performs improv comedy in downtown Chicago. This is both good and bad. It is good because he's not shy nor is he afraid to put himself out there. It is bad because he talks like he's hosting Access Hollywood all the time! "Buuuuut, I work... as a... PUBLIC speakING Professor. At a college in the suburbs of Chicago." And then he nodded his head like we all know what that's like. Oh, suburban college, right! Totally. I know how that can be. The daily grind. *yuk yuk yuk* He's the kind of guy who nudges you in the ribs and then waits with his eyebrows raised for you to agree with him. Basically, he's too schooled. He's too practiced. He's too game-hosty for my taste. The intonations are going to kill me, I know it.

So how did Andy get here? Well, one day he auditioned for Big Brother on a lark. The casting people were in town so he threw caution (and probably a lacy handkerchief) into the wind and said, "You know what? Why not!" Why not, indeed.

His enthusiasm is exhausting. Like, for real. He repeatedly describes himself as "whacky" while tossing out some jazz hands. Sometimes I wish I could be one of those happy people who smiles all the time instead of scowls, but then I see how annoying they are and I begin to feel really really good about myself. So thanks for that, Andy. I'm not as annoying as you are. See! Already you're turning me into a glass half full type of gal.

While his interview persona is very annoying, I'll reserve judgment on Andy. He may surprise me. You never know.

So, what do you guys think of Andy? Did you make it past 2 minutes in his interview? I didn't. I'm putting it off for when I'm really feeling lousy about myself. Comment it out, bitches!