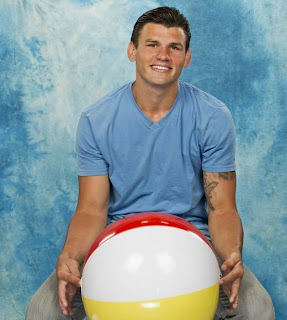 This is 23 year old Boat Shop Associate (he sells worms out of a styrofoam cup to fishermen) Jeremy McGuire and he is holding a giant ball between his legs. His slicked back hair coupled with the fact that "The Brigade" is his favorite Houseguest tells me that Jeremy could be quite hideous. But let's not jump to conclusions. Let's hear the man out.

OK so Jeremy is from Texas and he lives on a boat. One day he dreams of sailing around the world. This is an admirable dream and one I support since boats are ridiculously awesome - especially if you're lying in a glitter bikini whizzing across the water sipping on a gin fizzy. Although, I am scratching my head a little bit at the fact that Jeremy says he has "already started" on his trip around the world. Is this trip a trip of the imagination? Is your boat an actual physical boat or is it a boat made of thoughts and wishes? Jeremy, pumpkin, if you're sitting on a couch in Studio City, you're not sailing around the world. If you dropped acid before your interview, you could be theoretically sailing on a trip, I guess. 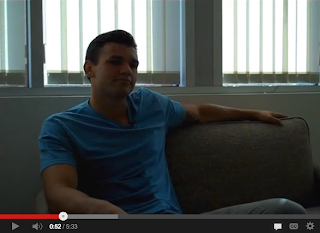 The more I watch Jeremy speak and the longer he keeps his arm up on the back of that couch, the more smug he becomes. I mean, you'd have to be smug to be sitting on a couch saying you're sailing around the world, right? Maybe the couch is atop Aladdin's carpet. Probably.

It turns out that Jeremy is a complete newbie when it comes to Big Brother. He has never watched an episode, but his mom is a superfan. Oh dear, I hope she doesn't read this blog. And if she does, hi Mrs. McGuire. I have a gun pointed to my head making me write mean things. Obviously, you cannot hold that against me in any way, shape or form. Laters!

While inside the house, Jeremy will definitely miss his freedom, but he is grateful for the break from technology. What sort of blasphemous heathen is this guy? That's crazy talk right there. Despite Jeremy's one or two eyebrow raising comments, he is basically a giant bore. I don't think he has any idea whatsoever what his mother got him into and I'm willing to bet he'll start lacing her calcium supplements with arsenic the second he gets out of the house. It was nice knowing you Mrs. McGuire.

So, what do we think of Jeremy? Is he a smug douche or a trippy hippy touching the clouds? Does he know Aladdin personally? Comment it out, bitches!

You know you want to watch the Live Feeds right alongside Mrs. McGuire, don't you?