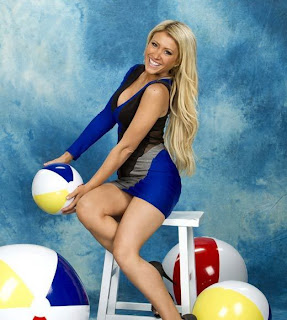 Next up is 32 year old Pageant Coordinator GinaMarie Zimmerman from Brooklyn, NY. GinaMarie's favorite Houseguests are Will and Mike. Finally! Someone who didn't say Jeff, Rachel or Dan. Perhaps I could like this GinaMarie. Let us learn more about her. 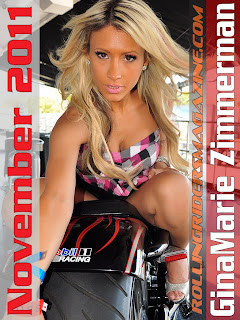 I actually did a quick google search on Miss GinaMarie yesterday when those names were leaked and the Pageant Coordinator gig must be new because my research tells me that she also likes to pose with machinery. Good for her.

Now, one website said she's from Brooklyn, but GinaMarie says Staten Island. Basically, all you need to know is that she tawks like this and could totally be on Mob Wives. And the more she talks and smiles, the more I think I could like this girl. There's something very Edie Falco about her and you know I'm a whore for some Nurse Jackie. Plus, she apparently sent casting a whacky video in which she killed zombies. Excellent. Much better than a YouTube clip of "I should be in the Big Brother house because... blah blah blah." Points for creativity, GinaMarie. 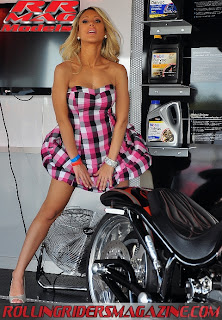 GinaMarie is stoked to be in the cast and her enthusiasm is palpable. She has an outgoing personality and a confidence that I can appreciate. You know what, guys? I think I like her. How great would it be if she teamed up with Amanda and they tore through the house like the tough chicks I'm hoping they are?

Nurse Jackie looks forward to the competitive aspect of the game since she regularly likes to push herself both mentally and physically. As far as strategy goes, she wants to get to know everyone first before she jumps into an alliance. She needs to suss out who she can talk to and who she trust before making any real commitments to other people. Her plan for the the first few weeks is to lay low and keep a target off her back. I have a feeling that once she's in the house and realizes that the game is all around her, she'll start playing much quicker than she anticipated.

Normally, GinaMarie is very loving and nice, but if she has to she has no qualms about "cracking a few skulls" while in the house. OK, it's official. I like her. She's tough, level-headed, confident and careful. There is definitely a hint of a bad girl in her where you know, you just know, that homegirl will throw down if she has to and yank out a weave or two.

So, what do we think of GinaMarie? Do you guys dig her like I do? Comment it out, bitches!

No more lollygagging! Click and get those live feeds!