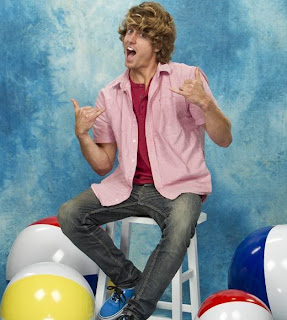 This is David and he looks like an enormous douchebag. David Girton is a 25 year old Lifeguard and his favorite Houseguest is Jeff (see my previous comment about him being an enormous douchebag). When you look at that hair and know he's a Lifeguard, I'll bet you think he talks like Spicoli and rides through life on his own melt. Well, you would be absolutely correct. David is the apex of the stereotypical surfer. Look up surfer in the dictionary and that douchey picture above will be staring back at you. It is SO uncanny that it's almost funny. Almost.

In the off season of rubbing zinc oxide of his nose and checking out gnarly chicks in bikinis, David unapologetically sits around and collects unemployment. He goes with the flow and flies by the seat of his pants. Basically, he's super lazy.

David is going on Big Brother to let America get inside of who he is. He's the class clown we're all supposed to care about for some reason. Have I mentioned that throughout his entire interview he looked bored, bothered, sleepy and probably a little high? It is almost as if he is annoyed that he has to be there. Sorry we're bothering you, David. Want to take a nap?

When asked what David will miss while he's in the Big Brother house, he replied, "The beach, fer sure." And what he won't miss? "Reality." Remember, it's summer which means that David probably has to keep an eye on toddlers playing in the surf instead of sitting at home taking bong hits and collecting his checks from the government. That "reality" is a bitch indeed.

Let us switch gears and analyze David's cutthroat strategic plans, shall we? David, what do you think will carry you to the end of this game? After a long pause where his eyes glaze over, David finally replies, "Uh, my personality." And there you have it. Hey, he could be a freaking genius. I mean, look at Hayden. He had no personality, zero charisma and dandruff for brain cells and he won himself $500,000. It could happen to anyone.

Let's not mince words, David is a moron. I'm not sure if he's supposed to be the man candy this season or what, but he's definitely not. He's a carpet fiber is what he is.

So, what do you folks think of David? Will he stay awake long enough to compete in anything? Is his "I don't care" attitude a stroke of genius? Comment it out, bitches!

No more slacking, slackers. Click and get your Live Feeds!