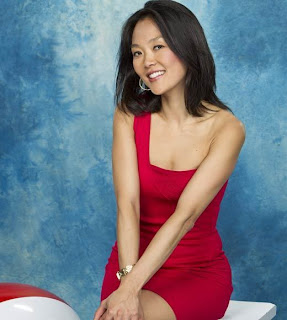 And now we meet 37 year old Helen Kim. At 37, she is by far the oldest Houseguest we've seen yet. And look at that, she is actually from my neck of the woods - Northern Virginia. Helen is married and works as a political consultant. I don't like to be stereotypical (rrrright), but I'm going to go out on a limb and say she's the "Overachieving Asian". Hey, I watched Joe Schmo, I'm allowed to say that.

17 seconds into her video and I nailed it! She was itching to chat before the interviewer even finished asking the question. She's poised and confident and so far is the only person to look directly into the camera. Helen is a tiny wisp of a girl with a LOT to say. A whole hell of a lot. If you looked at her and said the word "The", she'd be off and running... "The second time I was pregnant I was on bed rest and, let me tell you, that wasn't fun. Speaking of things not fun, I had this disease and it hurt a lot so now I have a high threshold of pain. Seriously, I do. Go ahead, stab me in the leg. I totally won't feel it. You don't have a knife? Here, I have one in my purse. I also have bungee cords, kleenex, and celery sticks so let me know if you need anything..." She's totally still talking. I just got tired of typing.

Helen is likable. I mean, there's not much to dislike here or make fun of, but I do think that she will be perceived as an enormous threat. She's highly intelligent, articulate and is a definite go-getter. She'll fill a leader role rather than being a follower. But can she last? I doubt it. Even though you can stick a shish kabob skewer up her nose and she won't feel it, she also describes herself as a wimp which makes me think she'll be pretty damn awful in Challenges.

On the other hand, she's pretty fearless when it comes to being nominated and says people probably don't deserve to win if they haven't been on the block at least once. Interesting. And that's definitely something I've never heard before. I think Helen could be compelling to watch. She might be one of those who is always strategizing, always planning. If she shuts her trap and keeps all that strategy on the down low, she could do well.

I definitely wouldn't expect any controversy from this chick though. She has a husband, kids, a job, a reputation, and a bunch of other things I can't remember that she said. The point is, she intends to play "clean" and, while she's perfectly nice, I don't think I can respect that. I want name calling and fists balled in anger not a mom with a good head on her shoulders.

So, what do we think of Helen? Will her mouth talk her right out the door? Will she be flitting from room to room making alliances and sub-alliances with everyone she crosses paths with? Comment it out, bitches!