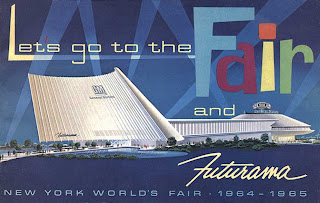 Inspired by the 1964 New York's World Fair, Scott Storey (Big Brother Production Designer) is always a stone's throw, a leap, and a few thousand leagues under the sea behind the trends. Last year he horrified us with 'Tokyo Poop' - a cheap polyester neon 1980's interpretation of a 1990's fashion movement. That shit was Bananas, B-A-N-A-N-A-S! I'll bet Storey is the type of guy who reads Sassy Magazine wondering what the kids will be wearing tomorrow. Naturally, I expect Big Brother 16 to be Shabby Chic. 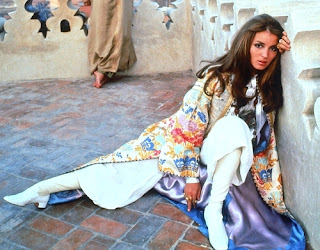 (Talitha Getty's home in Marrakesh was THE place to be in the 60's.)

Nonetheless! We have a new house to discuss so let's get to it. For Big Brother 15 we are whisked back to the swanky 60's... kind of. Let's face it - Storey has just now discovered a "new" show called Mad Men (on Netflix) and the BB15 house is the result. Lacking the sophistication of David Hicks or Dorothy Draper, Storey shuns the patterns and textures of Morocco and India preferred by the younger generation in favor of a more bold, graphic, space race-y modernistic influence. Think Jetsons as opposed to Talitha Getty. 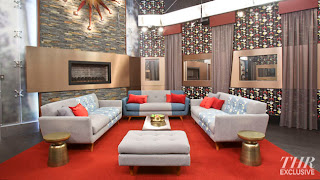 Let's begin in the Living Room. Notice anything strange? No nomination chairs! What could this possibly mean? Three nominees perhaps? No nominees? Sixteen strangers trapped in a house with no hope of escape? 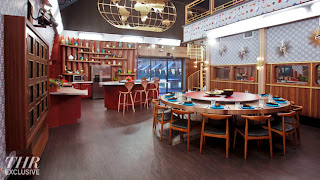 And if we move around the corner to the Dining Area, we'll discover a much warmer kitchen area - a stark contrast to the sterile white institutional travesty of BB14. The Norman Cherner inspired stools at the kitchen counter are more 1950's than 60's, but who's nitpicking? The rich tones, iconic World's Fair globe and the whimsical wallpaper is a vast improvement over the poopfest of last season. 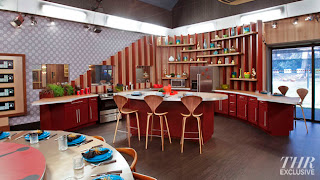 Continuing in the kitchen area, we find a circular counter and an actual island. From this angle it looks smaller, but the island is a nice addition breaking up the space that had been left empty for way too long. 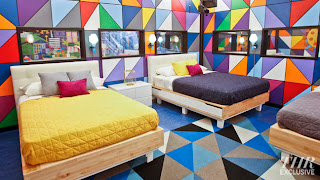 Some people might be confused by the "It's a Small World After All" themed bedroom, but in actuality, "It's a Small World" made its debut as an installation at the 1964 World's Fair. Most notable about the room are the double beds. Personally, I'd like everyone to sleep in one big huge room like they do in the UK, but I guess bed sharing is the next best thing. 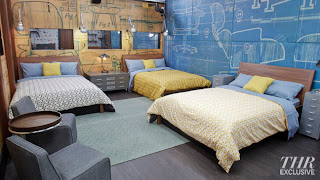 And here we have the more masculine "Eames Room". Eames, of course, of the famous Eames Chair. The Eames Chair is featured on the back wall with the Eames Ottoman on the right. I don't hate this room with its softer more muted colors than what we're used to. Again, we're seeing the double beds. So far I'm counting only six beds total (not including HOH and Have-Not). Six beds with doubling up equals 12 people. 12 people plus 1 HOH = 13. 16-13 = 3 Have-Not's? Perhaps not all HG's will have to double up after all. We'll know soon enough. 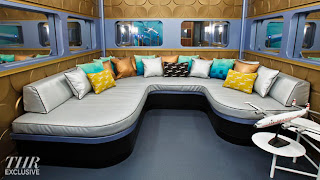 The Lounge was the only part of the house that I actually liked last year. This year's version is modeled after an airport frequent flyer lounge or the now defunct Christina Ricci vehicle, Pan Am. The wall is funky and time appropriate, but the silver circular couch is doing nothing for me as far as a wow factor. Perhaps it's the silver pillows on the silver cushion. 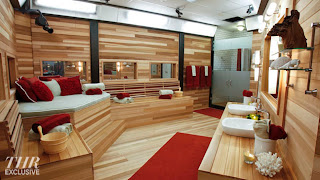 And now we arrive at my favorite room in the house - the bathroom. I'm all hot and bothered over the sauna theme and the shaggy pillows. Pour some more water on those rocks, bitches! It's very Alpine Chalet Chic and the blood red contrast is perfection. The whole space is inviting and cozy. If it weren't for the occasional stench of shit and other people's hair clinging to the sink bowls, I'd probably spend all my time in here. Quite frankly, I'm surprised the US house came up with it. It's something I'd expect to see over on BBUK. 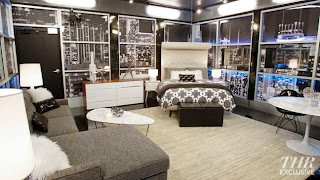 The HOH room is sleek and void of color with a tres cool LED-lit cityscape on the walls, but what's up with that teeny tiny bed? And upon a second glance, has the entire room shrunk? 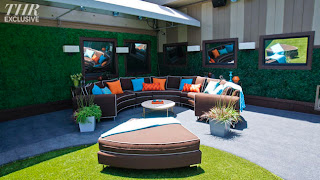 Let's venture outdoors to what I think is a sort of lackluster and stark sitting area. While I like the circular couch, I feel like a few more chairs and some side tables would help fill out the space. The sizing here is all wrong. Although, I am pleased to hear that they have finally replaced the lawn. Actually, it probably got up and walked out on its own accord. 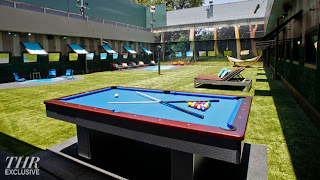 In this second angle, we can see more chairs and - oh shit - another hammock. After an entire summer of enduring Ian swinging back and forth on that thing with its infernal squeaks, I'm surprised they once again went with a wooden base. Now all we need is a box of Cheez-Its and my entire summer is ruined.

So there you have it. There is your Big Brother 15 house. How do you like it? Which room is your favorite? Why is that HOH bed not conducive to lovemaking? And what about the mystery of the no nomination chairs? Comment it out bitches and have a great day!

If you haven't gotten your Live Feeds yet, NOW is the time. More information is being released everyday and I wouldn't be surprised if CBS offers us exclusive cast content only available via the Live Feeds. Click below! No more lollygagging! You don't get more days if you wait until June 25th. The season is sold as one big golden chunk. So chunk it up already!

UPDATE: It looks like the loveseat in the Living Room indeed speaks volumes. As I was writing this lovely blog post, CBS announced that for the first time ever, there will be THREE nominees up for eviction. In addition, viewers will be able to vote for an MVP beginning with a pre-premiere vote starting Thursday, June 20th. The MVP will have a secret power that will be announced during the premiere on June 26th. Directly from the Press Release...


“The Big Brother MVP will force the houseguests to rethink their strategies.  With America rewarding good game play, it doesn't pay to be a floater this summer,” said Allison Grodner and Rich Meehan, Executive Producers of BIG BROTHER.

Rrrright. Wishful thinking, Sausage Fingers. America will vote for their favorites and by "America", I mean "cat ladies."
Posted by Colette Lala at 11:33 AM