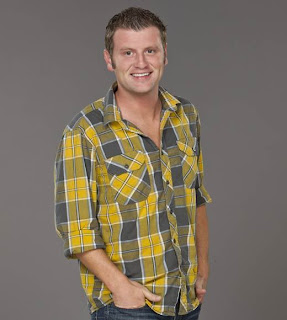 Today, we continue sifting through the last of the Big Brother offerings. Some have delighted. Most have disappointed. Let us see what we can uncover from these remaining victims.

Next up is 26 year old Property Appraiser Judd Daughtery from Englewood, TN. Judd is a small town Southern boy with all sorts of hopes and dreams - one of which is ending up on Big Brother. He is also a fidgety nervous guy who delivers stock answers with a twang. And I'm not sure, but there's a chance he's the result of fetal alcohol syndrome. There's a simplicity in his demeanor, sort of a thin crinkly layer where if you peek through to the inside, all you'll get are bones and gristle. What I'm trying to say is that Judd lacks depth. He is a simple simpleton.

As far as the game goes, Judd has many a catchphrase all fired up and ready to go... "Bring it on!" and "Let's do it!" are two of his favorites. They work in all sorts of situations. Are you excited to play Big Brother, Judd? "Bring it on!" How do you feel about being on camera 24/7? "Let's do it!"

Judd fancies himself to be a "people person" because he encounters people everyday of his life. And it is these encounters with "people" that will give him that strategic edge in the game. "There's gonna be lots a different people in the house," Judd declares. Yes Judd, there are. Good for you! In regards to all those people, Judd plans on being nahss ta e'rybuddy unless thar mayne ta he-um. Awesome. Someone I can write phonetically for. It's been a while and I'm rusty.

Strategy wise Judd definitely doesn't want to be a floater. He didn't come this far to sit around and let things happen. He wants to make things happen. I think he read that once in a Tony Robbins book. Being a hardcore Big Brother fan Judd is aware of what he likes to watch while sitting at home and quiet floaters don't rate very high with the lad. He hopes to entertain and delight us with his competitive social acumen because he's not vurry good at puzzles.

Maybe I'm being unfair to Judd for his slow lazy drawl. Or maybe I can recognize a bore with my lightning quick reflexes. Judd talks an ok game and says all the right things, but acting on promises is an entirely different ballgame. Overall, Judd is unremarkable and, well, he tawks funny!

So, what do you guys think of Judd? Could he surprise us and be Mr. Entertainment? Will he tawk to the cameras constantly thinking, at home, we'd enjoy that sort of thang? Comment it out, bitches!