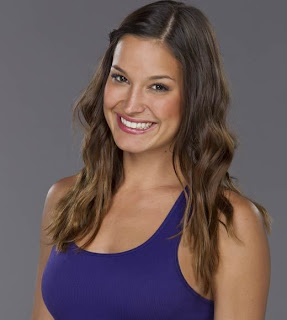 Next up is 25 year old Jessie Kowalski from Beaumont, Texas. Jessie is unemployed, but she'll always be employed to me. When I hear the name "Kowalski" I think Kowalski Tires. And when I think Kowalski Tires, I think Uncle Buck and this makes me happy. So, in my mind, Jessie sells tires for a living and that's just the way it is. From her photo, Jessie looks a little bit like the cute version of Lea Michele. Let's hope for our sake that she's not as annoying.

In person, Jessie looks nothing like Lea Michele. Photoshop is a tricky mistress, I tell ya. She grew up on a ranch and thinks her outgoing personality is what got her cast on the show. She could be down in the dumps about being unemployed, but she's not. She's an "always look at the bright side of life" type of gal who sees her unemployment as a great tool for victory. You see, since she has no job she won't be worrying about work and she can direct all of her focus to the game. Looney logic, but bright and sunny.

Since Jessie has grown up dancing and cheerleading she is used to cameras and "used to being the center of attention". A comment like that makes me think she's talking about after Big Brother ends and not necessarily the game itself.

Jessie describes herself as an "overachiever in every sense of the word" who tries her best at everything she does in life. Aaaand we've got a crier on our hands. I'm calling it now, anytime she loses, she'll cry. Perfectionists are like that. It won't be out of sadness though. It'll be out of insecurity and frustration with herself. Although, if I adopt Jessie's half glass full attitude, I would dutifully notice that two overachievers mixed in with two tough laid back chicks from New York might be a recipe for awesomeness. The NY chicks can point and laugh when the overachievers cry and starve themselves into another bout with anorexia. Sweet!

Overall, Jessie is quite confident and self-assured, but I also get the feeling that she always gets her way. She's blah in general and while she's a hard worker and determined, I'm not seeing much of that charisma I always look for. I'm not excited about her in a good or a bad way and that's usually not a good sign. I'm also not sure what to think about the fact that she has studied past seasons. People that are too careful and aware never make good Houseguests. Time will have to tell with this one. I'm not writing her off just yet. There could be some deep seeded emotional issues that are just dying to bubble over. I'll keep my eye out for them.

So, what do we think of Jessie? Will she get along with Helen or will they fight to the death? Comment it out, bitches!

If Jessie has a breakdown, you don't want to miss it!