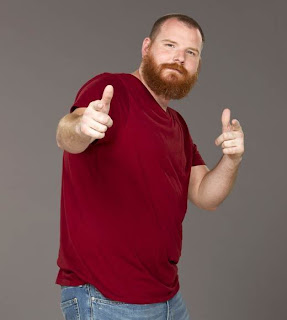 Last one! Spencer Clawson is a 31 year old Railroad Conductor from Arkansas. I love that he's a Railroad Conductor. That's one of those jobs that you think doesn't exist anymore. It reminds me of Edith Wharton and lace and elegance. Or maybe it reminds me of dirty faced lads with pageboy caps carrying all of their belongings tied in a bandana on the end of a stick leaping into empty boxcars. Spencer probably chases after them with a baton. "You get out of that boxcar, you rascals!" Now that I've invented an entire new life for Spencer, let's get to know the real him. 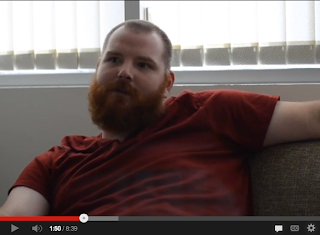 While Spencer is large in size, his demeanor is mellow, slow like molasses. He's a real guy with a real job and not someone recruited out of a bar. He thinks his realness coupled with his boisterous personality are the reasons he was cast on the show. He must be hiding his boisterous personality in the dining car because I'm not a seeing a speck of it today. Spencer is pretty much the opposite of boisterous as he leans with his arm over the back of the couch. He is even-tempered, unhurried and perhaps even a little restrained.

As far as Big Brother goes, Spencer is a hardcore fan who thinks that more people would watch the show if it was advertised as a mental game. He's a confident guy who has often sat at home watching Big Brother thinking to himself that he could play the game better. The more Spencer speaks the more you realize that he's one of those onion people. You need to slowly peel back the layers in order to find out more. Getting cast on the show wasn't a great challenge for him because he simply put himself into the Casting Director's shoes and imagined what that person would want to put on TV. And we all know those Duck Dynasty guys are a huge hit right now. America loves a salt of the earth hard working underdog. 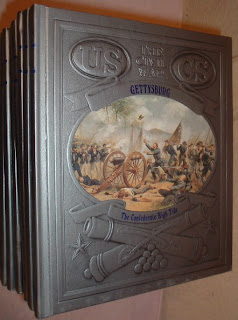 Once Onion Boy here gets going on a tangent you discover that he is extremely well-read and is probably one of those Civil War buffs with the whole Time Life Civil War series displayed proudly in his living room. He seems to enjoy history and recalls the story of how when Benjamin Franklin visited France, he left behind his silks and instead wore a coon's cap. This is essentially what Spencer did when he went to that Casting Call. Reality TV loves rednecks right now so Spencer went in there in all his redneck glory. Smart guy. I can definitely appreciate a thought process like this.

What I'm not too appreciative of is Spencer's game plan to be likable. His strategy is solely set in the social aspect of the game and he intends to last by making everyone want to keep him around instead of the other annoying guy/gal. While this strategy worked for one Mr. Adam Poch, it won't necessarily get you respect from your fellow players or admiration from the fans. Houseguests, we want to see you do stuff! We want to see you lie, manipulate, bob and weave. Being the likable guy no one is too concerned about is boring. Boring, I tell you!

Overall, Spencer is a bright guy with his druthers about him. On the downside, he is careful and calculating. Calculating is great. Careful is not. Careful is when you sit in the lounge in silence thinking to yourself. I have no use for that as a feed watcher. On the other hand, I'll bet Spencer will hate Nick and THAT I could find some use in.

So, what do we think of Spencer? Is he Adam 2.0? Will he be able to maintain his calm cool demeanor throughout the entire season? How long before he rams Nick's head into the drywall? Comment it out, bitches!

And that's it for the cast! It's an interesting bunch - some good, some bad, one horrible - and I can't wait to see what happens when the cameras turn on and my life as I know it ends.

This is it. The clock is winding down.